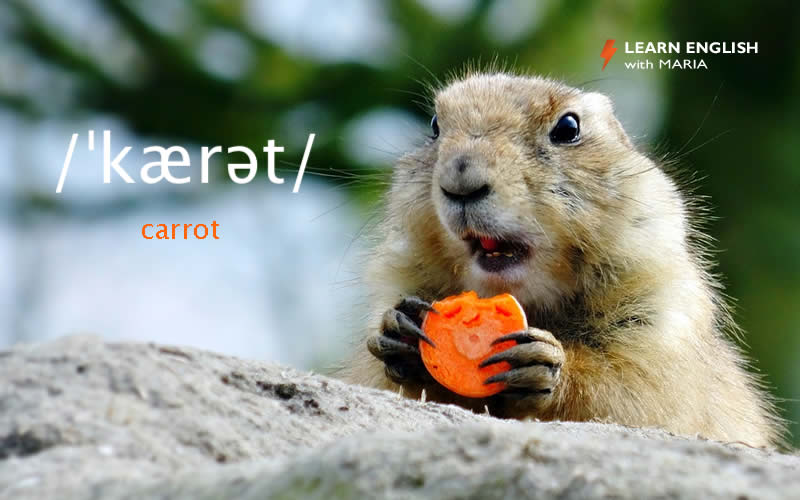 Note: there are some common English words in this post you may not be familiar with. To help you learn them, I’ve marked them with an asterisk (*) and I’ve given you their definitions at the bottom of this post.

It’s painful when no one understands your broken* English.

But it’s even more painful when you’ve made all that effort to become fluent and people still can’t understand you.

That, believe me, will drive you bananas*.

How to get a blank face

I remember once going to a grocery shop* here in Edinburgh, years after I moved to the UK*, and asking for some carrots.

– “Some WHAT?”, the guy behind the counter roared*.

His blank face told me it was going to be another one of those annoying* conversations, so I tried a description instead.

– “You know, those long orange vegetables that animals love”, I said, making what must have looked like a very rude gesture with my hand drawing a carrot in the air.

Clearly his “carrots” were better than mine. Life’s so unfair. Anyhow*, this is the correct way to say it:

carrot /ˈkærət/
Pronunciation tip Notice that the O in “carrot” has a /ə/ sound: /ˈkærət/

Alas*, my anecdotes don’t end there. Like that other time when I failed to buy the pair of scissors* in that shop window.

I still dread* that word, scissors.

scissors /ˈsɪzəz/
Pronunciation tip Notice that the double S in “scissors” has a /z/ sound: /ˈsɪzəz/

With other languages, once you get the hang* of the pronunciation, that’s it. You don’t feel like you’re playing yo-yo*: now you make perfect sense, now you don’t, now you do, now you don’t …

With English, you basically have to practise every single word, and try it on people, and fail, and try again.

Or you can just forget about the whole business of learning English and remain monolingual. But I guess that’s not an option, otherwise you wouldn’t be reading this.

The long road to humility

Every now and then I still get the occasional blank face from people. I’d like to think there’s something wrong with their hearing*, or that the background music is too loud, but I know it’s me.

So I eat a piece of humble pie* and go back to the phonetic alphabet. I practise a few words that I know aren’t my forte*, until the frustration goes away.

I tell you all this because your English pronunciation journey is going to be a bumpy ride*. Very bumpy.

But as long as you keep going, you’re safe.

Other days your “sheep” and “ship” will sound identical, or you’ll forget to drop the “l” in “salmon”. Or, God forbid*, you’ll stress the wrong vowel in “comfortable”.

In case you’re wondering, this is how it should sound:

What I learned from a wise lecturer

When I was doing my Master’s in English Literature at the University of Edinburgh, I suddenly realised just how bumpy my pronunciation journey was going to be.

One day a student brought a book he was reading. He went up to the lecturer*, opened the book at a page he’d marked, and pointed at a line.

The wise lecturer looked at the word, twisted* his mouth, and said, unruffled*:

Witnessing* the scene, I’d assumed the lecturer would feel embarrassed or annoyed. After all, he had three degrees* in English Literature, and was a native speaker.

But no, he didn’t seem bothered* in the least.

I guess he knew, as I know now, that you can never master every English word. You just learn them one at a time, as they come up.

What’s important is that you’re aware of your potential mistakes, and avoid them.

I, for example, no longer add an /e/ sound before words like “Spain” or “Smith”. I stopped doing that a long time ago. But I don’t always get the /ð/ right, and my /h/ is sometimes too strong, so I work on them from time to time.

If your first language is Spanish, you’ll dread the /z/ like I used to do.

If your first language is German, you may want to work on your /w/.

If your first language is French, your /r/ is probably not great.

If your first language is Italian, you’re likely to be making the non-silent /h/ silent.

In case you’re wondering, this is a hedgehog: 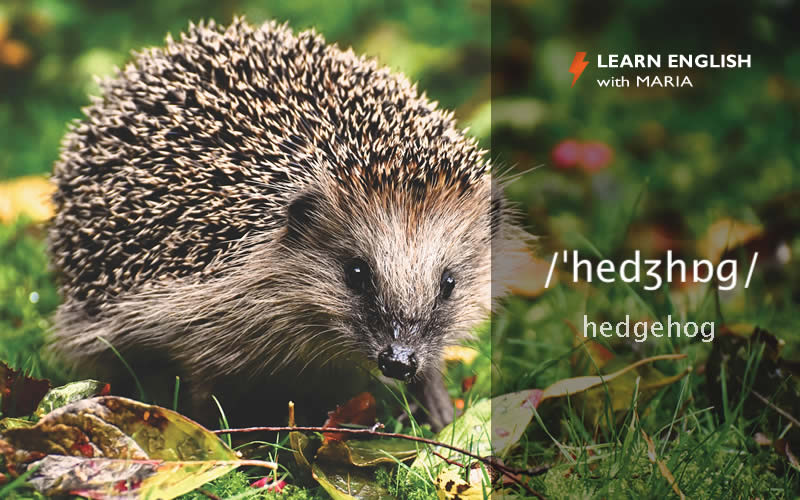 If your first language is Japanese or Chinese, you may want to work on your /l/ and /r/.

Sadly*, the only way to improve your English pronunciation is with regular listening and speaking practice.

The only way to improve your English pronunciation is with regular listening and speaking practice.Click To Tweet

Just listening to audiobooks and watching films will do little for your English pronunciation, no matter how many hours you put into* it.

Doing a combination of listening and speaking exercises is how I got the English accent I have today, and how you’ll get there too.

Do you know these 29 English words?

To help you expand your English vocabulary, here are the definitions of the 29 words I’ve marked in this post with an asterisk.

Most of those words have several meanings. Below I’ve given you the most relevant definitions for this post.