How to produce the /ə/

This is what the /ə/ sounds like when said by a native speaker. Press Play to hear it, and flip the flashcard to hear its sample word.

How do you produce the /ə/ sound?

In this section, I’m going to show you step by step how to say the /ə/ always right. First, let’s see what your lips and tongue must do to produce the /ə/.

This is what your lips should look like when making the /ə/ sound: 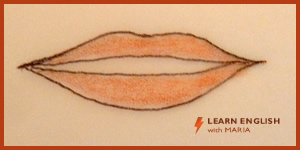 And this is where your tongue goes:

To produce the /ə/, you need to open your mouth a little, and relax your lips and jaw. Make sure you leave them in a neutral position, like in the picture:

Let’s listen to it again:

Do you want to have a go? Open your mouth a little, place your tongue just behind your bottom front teeth, and say /ə/ a couple of times.

Listen again to the /ə/ said by a native speaker. Play it several times, and then say it out loud along with the recording. Make sure your /ə/ is a short sound.

When saying the /ə/, your muscles should be relaxed, and your lips should not be rounded. To make sure you’re doing it right, use a mirror to compare your lip position with this image:

Let’s have another go at the /ə/. Make sure your jaw is less than half way open, and your tongue fairly flat at the front. Now, say the /ə/.

The tip of your tongue should be very close to the back of your bottom front teeth, but not quite touching them. Let’s see again what it should look like:

Your tongue should feel relaxed. Place your tongue very close to the back of your bottom front teeth and say the /ə/ once more. Remember that it’s a short sound:

Let’s now say a word with a /ə/ sound. First, play it a few times and listen to it carefully. Notice the /ə/ sound.

The symbol ‘ indicates that the syllable after it is stressed. In the word “salad” the stress falls on the first A. Since stressed vowels can never have the /ə/ sound, your first and second A should sound clearly different.

Play this flashcard and notice the difference:

Now, it’s your turn to speak. Press Play and say this word out loud, after the recording:

When practising words, make sure you say them out loud, as if you were talking to me.

To train your lips, tongue and jaw to produce the English sounds, it’s essential that you say words out loud, not just quietly in your head. Have another go:

How do you get to distinguish the /ə/ sound?

To be able to distinguish the /ə/ sound you need to do plenty of targeted drills, both speaking and listening drills, like the ones in the next five lessons.

What happens when you say the /ə/ like one of the other vowels?

As we saw in the Overview, if you produce a full vowel instead of making the /ə/ sound, native speakers will often find it difficult to understand the word you’re saying.

And, if you fail to say the /ə/ correctly in several words within one sentence, you risk not being understood at all.

The most common mistake you’ll find yourself making with the /ə/ is this:

Notice that the A in “dollar” has a /ə/ sound, and not the A sound you’re more familiar with from your first language. Play the flashcard above several times and notice the /ə/.

And here’s another example:

To become familiar with the /ə/, I find it helpful to think of it this way: imagine you don’t know the spelling of a word that a native English speaker is saying, and that word has a /ə/.

When you hear this word, if you’re not familiar with it, you can’t tell which of the five vowels it’s spelt with. It could be any.

To find out which, click on the top right arrow to see the word:

Have you noticed that “adamant” has not one, but two /ə/ sounds?

How to go through the next five free lessons

I’ve created the next five lessons to help you master the /ə/ by listening to some common English words, and saying them. For example:

That’s why the best way to approach the next five lessons is to focus only on the /ə/, and not worry about the other symbols and sounds. You’ll have plenty of opportunities to practise them throughout my English pronunciation course.

The words you’ll see in the next five lessons will come up again in other lessons. For example, you’ll have the chance to practise the word “picture” in the lessons for the /ɪ/, /k/ and /tʃ/ sounds.

Also, you’re likely to have heard all the words in the next five lessons, many of them quite often. But you’re also likely to have missed the /ə/. To make fast progress with your pronunciation, listen to those words with a fresh mind, as if you had never heard them before. In particular, notice the /ə/.

When doing the speaking drills in my lessons, make sure you say all the words out loud, not just quietly in your head. Imitate the English native speakers in the recordings as much as you can, focusing on the /ə/ sound.

Imitating someone else is going to make you feel uncomfortable at first, but you’ll soon get used to it. After all, imitating others is how we all learned our first language.